It’s hard to believe I’ve been doing 40 weeks of blabbing out “randumb” thoughts. You guys have been really responsive and supportive and I thank you all for spreading the word. The book is on the way.

With that said, the topics I had in mind for this week were halted when I heard the news of Osama Bin Laden being killed last night. But I still need you guys to check out the archive of our deep and informative blogtalkradio show last week on “Domestic Violence” and tomorrow’s show on “The Friend Zone.”

I know it seems like good news to most people that the man behind the loss of so many American lives is deceased, but I was a little down. Bin Laden had become this mystical figure in my mind. Like a modern day giant with a Bad Santa-like beard that was evil to some, a hero to others, but wealthy to all.

He was sort of like a cool, devil person that could buy his freedom and kept a whole nation from snitching. I don’t know if he wrote a book about how he obtained his bread and power but I would read it.

Sure he allegedly planned 9/11 and all that but do we know for sure? And we saw footage of him praying and rejoicing after the Towers dropped. Was that really live? And if so, how did we get that footage? Did he send it? Was it on youtube because I can’t find it now?

I think he was setup to take the fall and now he’s supposedly gone. I’m not sure if I believe this story though.
The last time I killed someone and I thought they were dead, they really weren’t. And the bastard was lying still for so long, it seemed as though I had sent him to meet his maker. I was satisfied that all my thug raps were real and I had taken a life…again. Then all of a sudden, one of his tiny legs twitched and then three more moved, and I knew the deed wasn’t finished.

All I’m saying is you never know if someone is really dead until you wrap them up in a few paper towels with your own hands.

The first time I met Bin Laden I was watching the movie Hannibal. And there his name was on the cinematic wanted list with Hannibal Lechter in the movie released months before the planes hit the buildings.

So they did know he was a threat huh?
And Bush did fly his family out the morning of 9/11.
And we’re left to believe that this wasn’t some type of plan to raise oil prices. I wish I could get some oil. I know it’s worth much more than kilos of coke.
I swear I would move to Afghanistan if I had an oil connect. Then I would dis all those drug dealing rap guys with their grams and weight moving and I would boast about my gallons and trucks. It may not sound as cool but who needs to sell records when you’re selling gasoline and oil.

So anyways, I’m not happy about this guy passing.

And the main reason is because for the rest of my days I am going to have to hear rap punchlines about Osama and 9 times out of ten they will rhyme with Obama. And although this may have just knocked off your socks or toenail polish with that clever rhyme scheme, trust me, I wasn’t the first to think of it.

It’ll be in battle raps, ciphers, freestyles, videos… I’m sure Fabolous just recorded his verse and his line will probably make you chuckle. Heck I might even sneak one in. Or not.

You know what trips me out? I’ve heard people say, “We killed Bin Laden.”
We as in our armed forces. Our armed forces as in Americans. Americans will pick the finest of times to come together as one.
We really, really need an alien attack to get the human race to team up. I’m gonna pray for that.

It took ten years to find Bin Laden, and he wasn’t in a hole, he was in a mansion. The assault finally went down but no Americans were killed and a firefight took place. No Americans killed? Sounds like a G.I Joe episode to me. A firefight?

I’ve never seen a firefight. Well in the Fantastic Four movie I did, but that was The Human Torch and that wasn’t believable.

What I think happened was the pres and Osama had a few drinks and some weed and came up with a plan to make everyone comfy.

Obama: I need something big for my presidency.

Obama: I gotta take you down.

Osama: I know that would be berry helpful to you. How about we help each other? You say you kill me, you don’t mention seeing Tupac in the living room, I let you kill one of my brothers and you take his body back as trophy.

Then just like the scene where Alonzo sets up Roger in Training Day, “Boom!” They shoot Bin Laden, make up a story, some rookie White cop is probably the shooter, he gets to go home and do the wife or the girlfriend thing.
I’m just saying…I want to see the body and the dental records before I go running around happy.
Not that I would be ecstatic that another man is dead just because the nation’s leaders told me to.

I know we have to blame someone but I don’t know if I really want to. Obama sounded really cool and cocky about the murder though. It was sort of like he’d done this before. And I don’t mean like the murders I’ve committed. Maybe this will get him put back in office, maybe Osama died of natural causes, maybe the next up and coming guy is waiting to plot a bigger attack and this was part of the plan like when Serpentor took over for Cobra Commander.

Do they know terrorists look forward to death? The graduation ceremony from terrorist school is a funeral.

Do you believe Osama’s dead? I guess a better question would be, do you care? 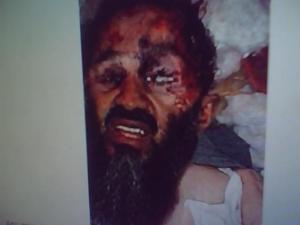