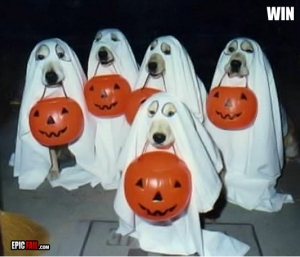 My first rap performance ever was on Halloween when I was around six or seven years old and I did the “Trick-or-Treat, smell my feet” song at a few neighbor’s doorsteps.

Well maybe that wasn’t a real performance and I didn’t write it myself so I guess we can negate that…but I’ve been thinking about the act of going door-to-door requesting candy from strangers lately and I’m wondering why it has to be tied to Halloween and children.

I think if someone comes to your door in an interesting costume and has a bag, you should give them something no matter the age, date or time of year.

Unless I’m the one answering the door then the rules change.

I know I trick-or-treated (begged) a few times in my life, but I can’t remember what costume I wore. Come to think of it, I don’t remember any of my Halloween costumes as a kid.
But I do know that I never got a trick as opposed to a treat. I got a “no candy,” “sorry, all out,” and even some wack ass fruits, raisins or apple sauce, but I think the whole “trick” part of trick-or-treat is gone.

If I had kids, I don’t think I would let them go around the hood asking for stuff on Halloween because I just feel like someone would drop an E pill in a Skittles bag or place jolly ranchers in vodka and my child would make the news.  And even though these may be demented thoughts that you don’t have or you may think I’m paranoid, you’re allowed to have your opinions.

No children knocked at my door last year. And I had tricks prepared for them. Empty Nerds boxes, half-eaten Twix bars, Blow pops without the gum in the middle, and of course condoms.

I think it’s never too early for prevention, especially if the children are bad, then they could be preventing bad offspring.

But with all of my efforts to enlighten the youth and humor myself, nothing transpired. This year I do not have tricks or treats for any child. I do however have some bottled water, hand sanitizer and napkins. No one has ever turned down napkins, especially minorities. We love us some free napkins. That’s why fast food places started making the napkin dispensers with the single sheet instead of you being able to just snatch a pile in your hands. Folks would grab a whole bunch and then put them in their napkin holder at home on the dinner table. You would go to Thanksgiving dinner at somebody’s mama’s house and they would have crazy stacks of napkins with a big white “M” engraved in them…but anyway.

People love to tell you they don’t celebrate Halloween. Like Halloween is Christmas or something and a big religious belief has to go along with the celebration or lack thereof. Then they tell you why they don’t acknowledge it and try to get all deep and philosophical because they Googled the origin and now they want to tell you that it’s Satanic.

I used to be one of those people. Then I turned twelve years old and I lightened up a little bit. However I have not gotten up the nerve to rock a costume as an adult. I wouldn’t know what to wear, who to be, or how I would recreate myself while still being cool.

Cool was always my first priority, and on a larger scale Halloween became synonymous with mayhem in the hood. Egg-throwing, robberies, masked people stabbing and slicing in the streets of New York were all a part of this holy day or holiday…whichever makes you see the irony.

I couldn’t figure out how eggs and Halloween got tied together, but kids brought them to school and threw them at people and buses and if you got hit with an egg it felt like the world was ending.

Now when I think about it, an egg doesn’t seem that harmful…unless it’s frozen. I couldn’t see myself purchasing a dozen eggs or more with the intent of throwing them in today’s economy. I’m getting hungry right now just thinking of scrambled eggs. Throwing breakfast at people is dumb. But I used to do it. And it was enjoyable.

I don’t know what the kids do now in the hood to terrorize each other but I’m sure it’s worse than yolk. If I was a teen I would throw water balloons with urine, or wooden drink coasters, or maybe the tiny plastic containers with the lids that they give you for take-out at restaurants with barbecue sauce or honey mustard. That would be very annoying to have one of those condiments explode on you.

And come to think of it, that’s not a bad trick-or-treat gift. I wouldn’t be too upset if I got a ketchup packet in my bag. Somehow running out of ketchup always happens when you’ve used up the bottle in the fridge and those little packets.

I was considering buying candy for kids that might knock on my door but I just can’t see giving away food to strangers without some exchange of currency. So forget that whole thing I said earlier about trick-or-treating being all year round. I hope the concept dies within the next decade or so. There are too many pedophiles with this date marked on their calendar like it’s Memorial Day. Now I hath made myself uncomfortable with my own thoughts. Parents don’t mind me, let your kids grow up and take some risks. No one’s giving out tricks anyway. Until now…