You know what idea I don’t like? It’s not even an idea; it’s more of a concept. I don’t even think it’s a concept, I feel like it’s a tradition. It happens all the time, every day, in every city, state, and town. It goes down at your job, at department stores, public bathrooms, restaurants, everywhere that there is a door with someone going through it, there’s someone attempting to hold it. You’ve had it happen to you.

You’re walking in some place minding your own business when someone else is either there before you or they’re exiting. And what do you do? You expect them to hold the door open so that you won’t have to do it. The heavy door that will take so much time out of your day must be held so that “your highness” can get through. “Oh no, not me,” you’re saying, “I don’t need anyone to hold the door for me.” But if they don’t, you will definitely give them a look, and an evil thought because door holding is protocol. Not holding the door is almost as bad as holding the door for someone that doesn’t say “Thank you.” 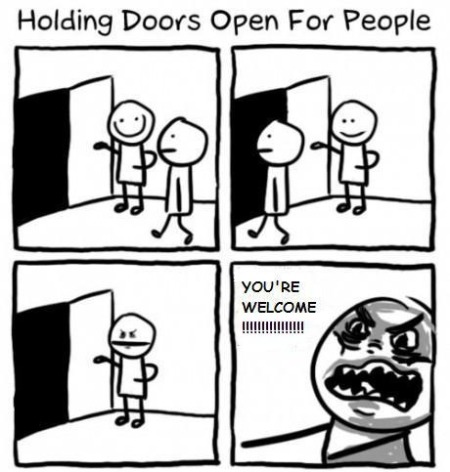 Wars have been waged between strangers, strange people, and co-workers because someone refused to hold a door. And how long should you hold a door for someone? What’s the proper amount of time, or is there a correct distance from person to person to calculate how long one should hold the door for another? Does it matter if they are elderly or adolescent? Does gender play a role? Should I hold the door as I leave a department store for the pretty lady coming in…who happens to be accompanied by a dude? Is he her brother, or her man, or a friend? Do I hold the door for him as well or do I pass it on to him so he can grab it and take over so I don’t overstep my boundaries? 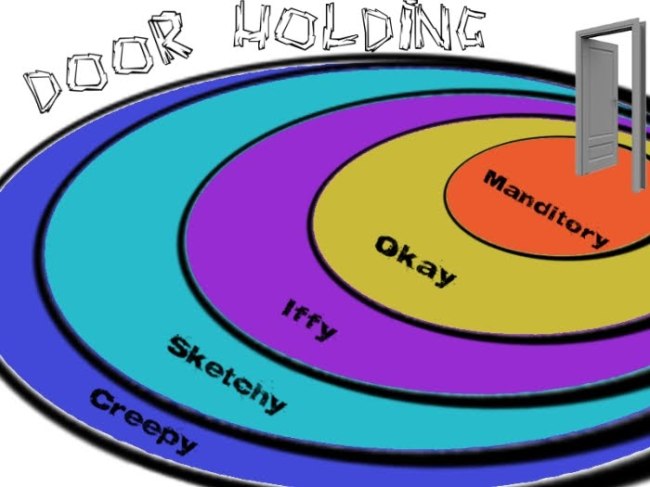 Have you ever been walking in some building and someone is holding the door for you but you’re obviously out of door-holding courtesy distance so now you have to do the little shuffle to let him or her know you’re not taking your sweet time while they treat you like royalty?

Or have you ever walked in a place while someone was walking out and you thought this was a guaranteed situation where you were going to have your hands free because this person was going to hold that door and you had a “Thank you” ready but instead a door almost hit your face? Maybe it was a time-sensitive moment for that guy or girl, maybe they grew up in an era of revolving and automatic doors, or maybe they just didn’t see you. And when it happened, you didn’t get upset, pissed or angry, but you couldn’t believe the nerve of that person for a split second. How could they not hold the door?

I don’t know. I say let every man or woman get his or her own door. Maybe you hold it for a person in a wheelchair or if someone asks because they have bags in their hands. But for the most part it just doesn’t make sense. Most of us don’t even like to hold the door on an elevator or a train car and with those situations, time is a factor. But when you’re simply walking in and out of a building, it’s just a waste of energy…unless you believe in common courtesy. Then maybe you have a point. And no I don’t think automatic doors are the solution. All automatic doors do is remind me how much money and electricity it takes for some door to magically open every time a human gets close. There are people starving all across the world, some of us have trouble paying bills, and your local grocery store spends more than you buy from there in one month on funding the automatic door.

And I don’t think we should bring back the doorman occupation either.

I know doormen exist in fancy condominiums and hotels and crap like that, and I don’t want to take food out of anyone’s mouth but I think a good idea would be to replace that job with the picture man. The guys in the clubs were ahead of their time with the concept that they would walk around with a professional camera and snap pics of you and your friends…then charge you for the memory. Some of them even had their own backgrounds ready for you to hold on to the moment for years. It happens at aquariums, cruises, and amusement parks. So why not restaurants, shopping malls, bars, sporting events, BBQs, and most of all…the gym.

You all need it; you all want it. We need an Instagram man at all events. He doesn’t even need a camera, he can grab your phone, and then your friends’ phones, or one of you can share it. Then he can move on. This would eliminate the need for selfies. Bathroom pics would vanish. And we all know about the gym pictures. The pictures that let everyone know you are on your way to fitness even if you never actually meet your goal, there is visible proof that you put work in, and there were weights in front of you, and you had on exercise gear, and you perspired a tad bit.

Wouldn’t it be subtle if the picture man could snap you working out or posing slightly as if you didn’t know he was there? Just imagine how much more props you would gain for a photo that didn’t have you holding your phone in front of the mirror with some caption signifying how determined you are and a slew of hashtags that make you appear somewhat obnoxious.

I believe the selfie itself will be dissolved in the future by the “levitating-phone-photo-snap” app, which is going to take some time to get the kinks out…or the picture man. Some of you may choose the former. As much as I would rather self-checkout at supermarkets, I wouldn’t mind personal interaction with picture taking so that we wouldn’t have to bug a stranger and ask them to take a shot of you and get it right with one try. 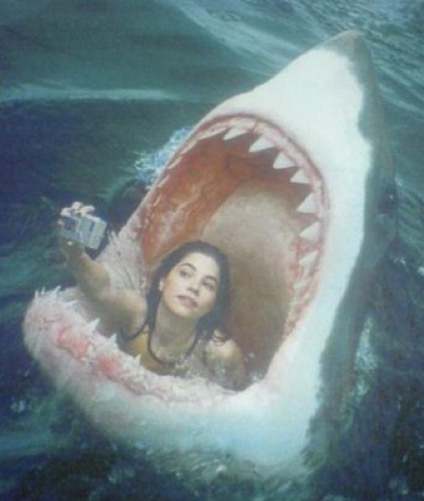 These are just my thoughts.