A friend of mine told me that whenever he was having issues with his wife he envisioned leaving her for this woman that lived across the street from him.
He said his neighbor was a single mother that was very attractive, friendly…almost too friendly and she left her curtains open quite often. He explained to me that the vision took him places he would never explore in real life; where he actually packed up all his things and moved right across the street to live a new life and show his wife that this new woman had all of the qualities that she didn’t. 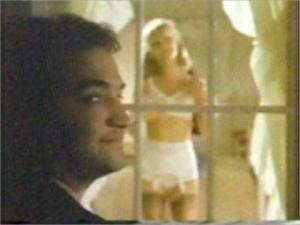 Then he went on to tell me that the daydream would shift and those qualities that were missing in his wife were replaced by new issues of baby-father drama, unreal expectations, jealousy and finally he would picture himself looking across the street at his ex-wife wondering if he had done the right thing.
He said it was scary imagining himself across the street staring at his old house looking at his ex-wife…who would then be a single mother, attractive, mysterious, and somewhat sexy then all of a sudden, he realized he had a good thing. Or better yet, he has a good thing because those thoughts kept him in line.

The story enlightened me a little bit, the vision made sense, and I began to analyze the things in my life that I needed to look at from a distance in order to appreciate them more.

The greener grass theory caused me to actually write a song. And on our blogtalk radio show tomorrow (3/29/11) we’re going to discuss “How To Get Over Your Ex”. Not the pill, the person.

The concept of the Ex is as interesting as the letter “X” is. The two intersecting slashes that make it up seem so final. It looks like a stamp, like it really marks a spot. X is a strike in bowling, a ten in roman numerals, a symbol where you put your signature, and a rating for sexual content.
Some X’s are good, some have mutant powers, others are bad, but most are intriguing. I guess as a prefix it negates what you meant to a person. An x-lover, or x-boyfriend or x-manager all mean you were, but now you’re not.

How does one get over an Ex?

I’m not sure there’s one distinct method. Most of us wouldn’t know until we’re either confronted with feelings or have moved on to someone new. And even then the old feelings can still sneak up on you.

Does it mean you still want to be with someone from the past that you knew wasn’t right for you? Nah.
But there are theories that we never really get over a real Ex. I mean someone that dented our hearts. An individual we shared adult moments with that affected our lifestyles, altered our character, and shaped our being. Those people become a little more than stepping-stones and measuring sticks. They have solidified memories that draw comparisons. Whether the split was amicable or you got dumped, or they couldn’t get their act together, you still wonder “what if?”

And that is life. I feared commitment for years because of the “Ex-Factor.” My dating experiences always led me to believe that there was someone somewhere in every woman’s life that had the ability and open door policy to return whenever he wanted.

The Ex was a person that was actually a “Y” in her head. She knew he wasn’t right but she couldn’t figure out “Y” he always knew how to get back in.

He could say, “Oh I’m not ready to be your man but I want to see you, I miss you.” He could try, “Oh I’m in town for the weekend. I just want to talk.” Or he could be the father of her child that makes her feel like that college girl that snuck in his dorm room every time he comes around and she can’t resist the nostalgia.

I made a lot of those theories up in my head. And maybe being the “Y-Factor” person myself a time or two led me to believe that karma would serve me the fate of falling for someone that had a man-in-waiting ready to snatch back his old love no matter how cool I thought I was.

How many of us have felt threatened by your current significant other’s past? 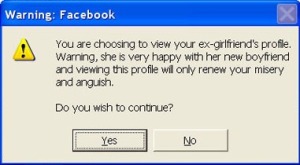 You heard the name, you’ve seen the picture, and you may even know the person. You’ve viewed their Facebook pictures making that “is this what you liked?” face and you even flirted with the thought of clicking that “add as a friend” button but you knew questions would arise.
Are you insecure? Cautious? Jealous? Or are you foolishly human?

Now that your mind has drifted off into thoughts of the person or people that you think of from time to time from your past that you just didn’t click with at the time, think about what made you get over them.

Was it time that passed or was it someone new? Was it the fact that you looked in the mirror and said, “If they don’t want me, I will be fine,” to yourself?

Or did you just figure that you deserve better and this isn’t it?
Or are you not completely over the ex-hill? Are you still climbing, falling, slipping, waking up from dreams, having visions of what could have been, wishing you get one of those long emails from them that expresses exactly what you’ve been feeling?

Or maybe it happened without a conscious thought at all and your present moment is what you make it. Some of us don’t live off of memories and time-travel desires.
Are you over your Ex? 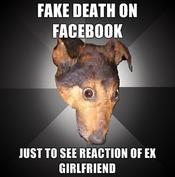