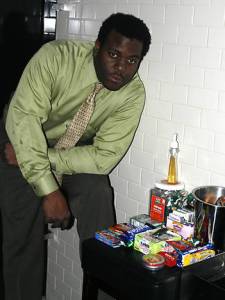 Last time I left you guys I was talking about strippers and needing change and recently I experienced another scenario where I sought change.
I was out at a loungy, sportsbar place and I walked in the restroom excited because I knew this spot had one of those heavy automatic hand dryers and who do I see? Bathroom attendant guy.

Now don’t get me wrong, sometimes you go to the club and might need some type of gum or candy or extra fragrance and at that time and that time only is the bathroom attendant guy helpful.
This elderly Black gentleman had the whole layout: sour powers, Dentyne Ice, mints, Vera Wang, Gaultier, Blue Jeans fragrances etc, his own set of towels, everything under the sun. And right next to all of this stuff was the tip plate. The plate he would empty in his pockets but keep a few ones out there to give people incentive, but he didn’t leave too much money showing because it would look like he was paying his rent handing out towels.

Altogether, he could’ve spent maybe $20 on this whole setup, watered down fragrances and discount candy isn’t fooling me. But here I am compelled to give. I washed my hands without even using the lavatory and I got out of there. I think I had $5 cash on me maybe and we had a server that actually was doing work…not handing me a towel…and a paper towel at that.
This guy handed me a paper joint and I couldn’t even use the dryer after that. He ruined my trip and wanted bread on top of that.

About an hour later I really had to use the facility and now I knew it would be uncomfortable because I didn’t give him a dime last time. I think the rules should be if you don’t engage in convo with him or take his refreshments then you owe him nothing. He wasn’t even one of the over-friendly ones.
I’ve seen bathroom guys at the club that had lintbrushes and would brush your shoulder while you looked in the mirror…one guy had insightful words and compliments for everyone. I think he had jokes too, and this other cat had music and candles.

Truthfully, the restroom is the last place I want to experience any exchange of ideas with strangers but I say if you’re going to make this a career or whatever, go hard. I don’t know how it is for ladies’ bathrooms, I haven’t heard any stories about them but I’m sure it’s not as creepy.

So I mapped out my plan of attack to thwart reaching in my pockets this time.
Scenario 1: I figured I could pretend I was on the phone, not make eye contact and just head on out.

Flashback 1: I remember being at the sink and reaching in my pocket one time for chapstick and the bathroom guy said, “Thanks son”
‘What did he just say?’ I thought to myself. Did he thank me in advance AND call me son? Damnit, he got me. And I tipped a few dollars.
Ok, phone plan is out.

Scenario 2: How bout I use the sink closest to the dryer and just go for the dryer?
That’s it, I don’t use the towel; I don’t owe him.
But what if he remembers me and speaks to me this time?

Flashback 2: I recall a restroom trip at a club and Bathroom guy was extra cool and cordial, joked with me and some other cats and they all dropped a few bucks but I didn’t have it so I just said peace and tried to get in on their tip like it was mine.
The 2nd time I went in that night, he was so cold and distant like he kept a mental image of me sneaking out and I was crushed. I drank 2 more drinks just so I could go back in there a 3rd time and I had some change this time, I think I gave him a 5 and his face didn’t even light up. He just said “thanks” in kind of a monotone way like it was expected, like it was a part of clubbing.

Present day: I decided to combine the 2 scenarios and try the phone thing and the sink close to the dryer. There I was, finished my business, eyes low, started reaching for my phone as I simultaneously tried the soap on the sink near the dryer and nothing came out, I shifted to the next sink and nothing. Then it happened…he had his own special soap he poured in my hand before I could find the working soap dispenser. He won, it was some anti-bacterial, sweet but not fruity smelling soap and I was locked in…I fumbled the phone exposing that it didn’t ring, I washed my hands, received his wack paper towel and asked him for change for $5 and he pulled out a knot that looked like he had been on the corner all day slinging.

The moral of this story is something about giving but I’m not sure what it is. But now I think that Bathroom guys have kids and hopes and dreams and sure they might be scammers or just innovative businessmen that know how to get some extra tax-free cash during a recession but either way, they are a part of society, and if we accept grownups with cornrows then we should accept them as well.