← My Daughter’s Dream
The Reason I Retired →

One day I was sitting in the crib and flipping through channels and ironically I landed on a movie with a plot that surrounds a remote control. 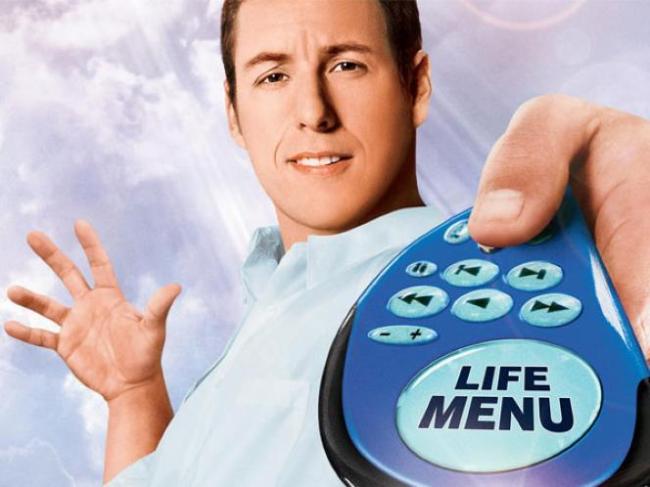 I saw it as a sign, similar to cooking meth in the kitchen and Breaking Bad comes on…you would have to check it out. Anyway, I had never watched The Adam Sandler flick entitled Click because I assumed it might be goofy and silly with predictable moments and lighthearted comedy. I like Adam in roles where he’s semi-serious like Spanglish and Funny People but I figured that a story about a remote control that pauses and plays his real life had to be juvenile. Maybe you’ve seen it since it came out way back in 2006 when I was still counting daytime minutes so you might not be too interested in what I got from it. Or maybe you haven’t seen it and reading this could possibly spoil it for you. I guess those sentences were warnings to stop you from continuing to read but I didn’t mean to discourage you. I think you should keep going since you started reading already. Now I’ve wasted time convincing you. Which brings me to my point about the film itself; time is important. Adam’s character, Michael Newman gets a universal remote control from Bed, Bath & Beyond and the remote is from the Beyond part of the store. Christopher Walken plays the angel that is omnipotent through all of this as Michael gets home and realizes that his new remote controls the universe. So what’s the big deal you ask? How many of us would like to manipulate time, view our past, skip through the work-day, interpret a language, and basically alter any situation at the touch of a button? When Michael was faced with conflict he could mute it, when there was something he didn’t enjoy, he could fast-forward, there were no longer any wastes of time.

During these periods where he fast-forwarded, his body was on auto-pilot and he became a catatonic version of himself with basic functions. Mike skipped through a loud dinner with the family, a morning bathroom routine, foreplay with his wife and an argument with her, a common cold and I compared this to real life. I thought about the times during each day that most of us might want to forward. These moments, whether bad or good, are important for our existence.

Michael’s conflict arose when his remote control began to function on its own without his help based on his previous actions. So anytime an argument was brewing…or foreplay began…or he had a shower…or dinner with the kids and wife, his life would instantly forward past it and he would wake up attempting to be “in the moment”. Of course once he realized what was going on and that he was missing relevant chunks of his life he helplessly tried to stop it from happening.

If we can take his scenario and apply to our lives, how hard is it to discontinue the constant action of focusing on work? We don’t have a remote control but we have our minds and hearts that make conscious decisions to wish we were doing something else quite often. Sure the plot was extreme in comparison to our lives. Or what if the movie was highlighting what happens to us when we abuse drugs or alcohol? Maybe we go into some half-witted state where we don’t focus on family and real life. Some of us use external factors to get through the days. I often feel like films with supernatural twists can always be lessons that we can apply. We drink or smoke to numb pain, and to lighten the load and some of us believe it will make tedious tasks move faster.

Mike was focused so much on work, that he unknowingly made a decision to bypass his everyday life until he got a promotion. He then woke up one day and he was divorced, his kids were foreign to him, his wife remarried, he gained weight, his health was fading, and his father passed away. But he had his promotion and success. We all go through moments where the obstacles or hurdles in front of us seem like the end of the world. Some of us are at work right now counting down the minutes until we can leave. We’re searching for the point in our lives where we can celebrate happiness. Sometimes the mundane, monotonous, on-goings of everyday living play out like a horror flick in our minds. But can you imagine living without what we perceive as struggle? 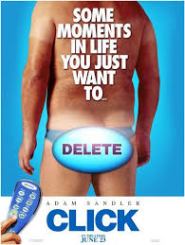 Can you think back to when you were in high school and homework assignments and projects seemed like the worst thing ever created? When a failing grade, or an issue with the opposite sex or a rumor about you felt like you could have died right then. But you didn’t. And today as a grown adult, you look back at those days and realize they weren’t so bad. The same can happen years from now when your body is a little slower, your hair a little more gray, and the people that are close to you now may or may not be around. Click wasn’t an Oscar winning cinematic piece of art. But it was a great movie that contained a lesson about life. We set our sights on the destination so much that we forget about the journey. We don’t appreciate the run-ins with family because we feel like they’ll always be there. We hardly acknowledge the meals we can afford or the clothes we can throw away or the space we have to occupy that we call our own. The little occurrences in life come together to create a joyous existence that most of us would choose to fast-forward if we could. I used to fight sleep because I wanted to be awake longer and work harder to be successful.

Now that I’m assistant coaching high school basketball I hear kids everyday that tell me about where they want to play after they leave school. They say Division 1, they mention big name schools but when they are asked to run hard in practice it doesn’t always happen. They view the journey as work, and we equate work to being hard, and when something is hard we don’t want to do it without a reward. Most people want the reward fast. So ask yourself if you could go to sleep until you become a millionaire…or until you finish grad school…or until you lose 30 lbs…or until your child is earning income…or until you find your soulmate, would you do it? If the answer is no, then rethink your daily moves and exhale slowly and enjoy every breath whether it may be a part of a rough 24-hour period or the best day ever. Happiness comes and goes; joy is within.