My team didn’t win the Super Bowl. Let me rephrase that, my team wasn’t in the Super Bowl.
Come to think about it, I don’t have a team at all. And I just came to that realization this morning. I don’t play fantasy sports, not because they aren’t cool but because I don’t have friends to explain how they work or to compete with. No! Don’t feel bad now and invite me into your league. I’ll forget that I’m playing and lose terribly and then you will have wasted your precious time.

And it’s not because I’m busy or anything, I’m just bad with doing anything daily that’s not eating or cleaning myself.

With that said, all these years of my life I’ve been rooting for the Giants, hoping North Carolina’s basketball team wins, blah blah, blah and for what?

Being a fan of a professional sports team gets you absolutely nowhere. The only outcome is continuous disappointment. If it’s your college alma mater or your kid’s soccer squad, I say go hard, but losing your lunch over some millionaires that don’t know you or need you is too much.

Sure I was happy the Lakers won 2 years in a row, but now I’m all worried they won’t win again. And you know who doesn’t care? The Lakers. 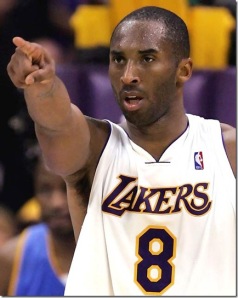 I don’t have stock options; I’m not related to anyone on the team, I’m not even from LA. And yet here I am, watching avidly, calling myself a fan. A fan of a team isn’t like being a fan of an artist.

If Chris Brown was to hit another woman, chances are he would lose fans, they would buy less records, stop coming to his shows, and hurt his career directly.

If Kobe allegedly rapes another woman, he’ll get backlash, a loud boo here and there…hell he may even lose an endorsement or 2 but people will still go to the games. His jersey would still sell, he wins no matter what.

And his paycheck won’t get altered. He gets a salary. I’m a fan of someone with a job. And he’s not even the only person responsible for the team winning. At least if I’m a Tiger Woods fan, it’s all on him if he loses. Team sports have a lot of folks to blame. The more people down with you, the more finger pointing.

Imagine being on a football team and you play defense and you’re on the sideline when some wide receiver drops an open pass that could’ve won the game. I would be pissed. How pissed can you be sitting in your living room watching though? Do I have the same right? It’s entertainment isn’t it? For the fans?

Don’t believe that, fans don’t get anything but fanship. No key chains, no mini-trophies. When we fill out census forms, they should ask you for your favorite teams. And when they win a title, you should receive a bonus check in the mail for $25 or something. Or a free ticket to next year’s game, or season 2 of random TV shows like Bones or House or Dexter even. The show should definitely have 1 word, and the 2nd season would make you have to get the 1st season. This would have nothing to do with your team but this is what should happen. Cross marketing.

What if you were a fan of the Bulls in the 90’s and had to wait like a decade and a half later for them to be contenders again? Just admit you liked Jordan and give up on them already. It’s ok. Or maybe you liked the Knicks back when Patrick Ewing and his coco bread kneepads were dominating.

In 2011 you can be a fan again. But that took entirely too long, Pat’s son is a college grad. People were Cavaliers fans just last year, now they’re sending death threats to Lebron and throwing out racial slurs.
If you think about it, people are upset at a dude for changing companies. I thought he was a punk too but now I see the error in my judgment.
If someone leaves Mr. Pibb to go work for Pepsi, can you really be upset? Some of you don’t even know who Mr. Pibb is.
They were burning his jersey in Cleveland. That’s like a Sprint worker burning my old bill because I switched to TMobile and I took my number. That is kind of disrespectful on my part but I don’t think it’s that serious to want to kill me.

Recently, my favorite old lady greeter at Wal-Mart left and I thought she re-retired, but I heard she went to Costco. I was like, “I don’t have a Costco card. I can’t root for you.” But I didn’t burn her old apron.

It crossed my mind but I didn’t. Look all I’m saying is continue to be a fan if you want to, go to games, spend $40 on food and drink while you’re there, argue with your friends about statistics, google those stats while you’re out on your smart(ass)phone, wear team colors, make songs, lose bets, and think nothing of it.

Or change teams every season when the playoffs roll around like I’m about to do, and when you’re at next year’s Super Bowl house party or this year’s March Madness shindig, be sure to go pee when the action’s happening and not during a quiet commercial. You’re welcome.