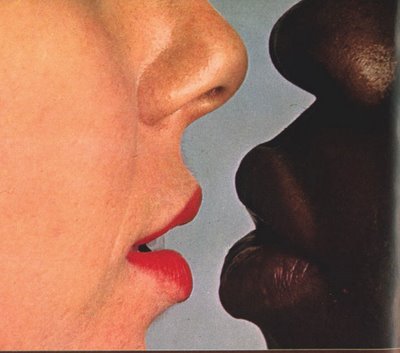 I don’t know what it means to get down like what or why DMX and his niggas do it but I know if you’re Caucasian and you just read that aloud you probably felt funny when you saw the word “niggas.”

And maybe when you sing a song that has that word you politely omit it in an attempt to be politically correct and not offend anyone.

But if a tree falls and there’s no one around to hear it, does it make a sound?
And if a White person sings “Jigga My Nigga” in the comfort of their own home are they racist?

I don’t think a word makes you a hater of a race. I mean if I was anything other than what people call Black I would probably not say “nigga” and I would feel awkward when the word is used.

But if my girlfriend was White, Green or Orange, would I be cool with her saying it?

It’s just a word right? What’s more important are the thoughts. How does she view me and my so-called race? Does her family think my darkness makes me a waste of sperm? Can we watch Chris Rock comfortably without wondering if his Black/White observations weren’t being over-analyzed and stamped on both of us?
Can I watch a Spike Lee movie without smacking her for no good reason? If she’s Spanish can she say “nigga” and can I say “spic” in front of company and it be all good?

If she’s Jewish can I make cheap jokes? Can I tease my Arabic shorty about suicide bombs and 7Elevens? No? I went too far?

I have been told by a few of my chalk-skinned basketball buddies that they drop the N-bomb here and there and it doesn’t mean they hate negroes.

What is racism anyway?
Isn’t it believing your race is superior?
Don’t we all think any group we belong to rules?
You big up your block, high school, country, neighborhood, fraternity, sorority, zodiac sign, gang, phone carrier, we affiliate ourselves with crews and clans all the time. We love separation. We need it. So we can point to others and say, “They’re not down with us, we’re better.”
We went from nigger to negro to colored to Black to Afro-American to African-American to nigga and it’s just like a band-aid on a gunshot trying to make a group of people feel like the furthest thing from a slave as possible.

I’m saying “we” like I’m a part of this African-American crew.

How the hell are we African and American anyway? They combined a continent of descent and the country we live in to make the name of a nationality. Really?

See those aren’t as catchy but you get the drift.

The bottomline is, if you belong to a race or religion or nationality and you decide to love someone that is not of the same one, is that an issue?

When you make your list of characteristics and desires in a partner, is skin color on there?

Are you curious about the “other” side? Do you have pre-conceived notions that certain types of people have better credit while others might be stereotypically lazier?

Have you ever said to your friend, “I’m done with dating within my race, they don’t appreciate me?”

How insane is it to be a White woman in love with a Black man but never acknowledge that the two of you are not depicted the same in America?

How much of an evolved human do you have to be to get over every prejudice, stereotype and notions that come with sharing a life with a person that is of a different origin?

Why should it matter? Love is love and if we were all blind, enlightened, or our physical appearance was so mixed up that we couldn’t pinpoint someone’s mother continent then the world be a better place.

Not really because we’d find something else to separate ourselves. Even the Smurfs had beef after awhile. Y’all let me know if dating and loving someone outside of your race even matters anymore. Will it even be an issue in 20 years? Does it matter now?